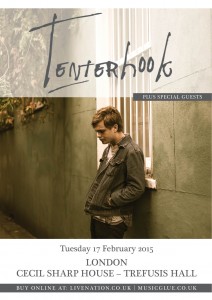 Currently on tour with Asgier, London based singer-songwriter Tenterhook released his 2nd EP this week, titled ‘Tenterhook 2’. Its available now to buy/stream on all good digital stores including; iTunes, Spotify, Amazon, Deezer, 7digital and more.

Tenterhook has also this week announced his next headline show which will be at London’s Cecil Sharp House, tickets are on sale now here. His previous two London show’s sold out well in advance so get your tickets now!